In 2018 we released a free iOS* ( iPhone, iPad ) app via the App Store.  In June 2021 the developer removed it due to additional costs for annual licenses being charged per app.

Thanks to The Arts Council of England funding I am now able to release a new app that will work on Android and Apple devices, with the addition of ‘Pioneer’ which you can read more about here.

The new version is triggered by actually being where it once stood in Kemptown seafront along past The Marina to Rottingdean using geo-tagging and by new marker images that will be available from  places in Brighton (Lighthouse Arts centre, Volks Railway) and in Hastings ( probably The library in Trinity  & The Royal Victoria Hotel ), tbc. 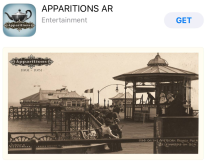 Apparitions brings back lost heritage of Hastings and St Leonards.

You can also print them out from here.

* iOS device needs to be upto date – running system 10 or above for any ‘AR’ to work, some older iPads may not be updatable. 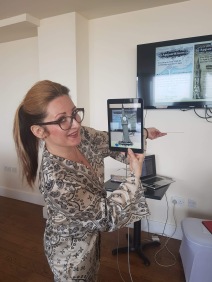 There are three experiences and these can be accessed by anyone with a mobile phone who has downloaded the  free ‘AR’ application ‘Apparitions’. Initially we are releasing this on the App Store for Apple devices ( iPads & iPhones ) until we have raised a little extra funding for the build and release of the same app for Android phones.
If you are interested in trying this for yourself, please drop me a line here. Each experience requires headphones to access the soundscape attached to it, time travelling from the launch of the bygone site to its demise. Some of these are being created by me by binaural specialists in Liverpool Kinicho. They have become known for their hi-fidelity sonic reproductions of sound spaces, creating authentic and realistic spatial listening experiences that are easily accessed by the public. The company is noted for its binauralisation process, in which their own blend of psycho-acoustic processing creates convincing 3D spaces with realistic kinetic audio.

Augmented Reality (AR) is a live direct or indirect view of a physical, real-world environment whose elements are “augmented” by computer-generated sensory input such as sound, video, graphics or GPS data and displayed whilst looking at the screen via the camera in most smart phones – android and iPhone.

23.08.18 – collection of postcards from Judge Sampsons, our sponsor.

01.09.18 – Apparitions in The Alley, Rock Alley, Claremont, Hastings
over 100 persons attended this and interacted with the artworks